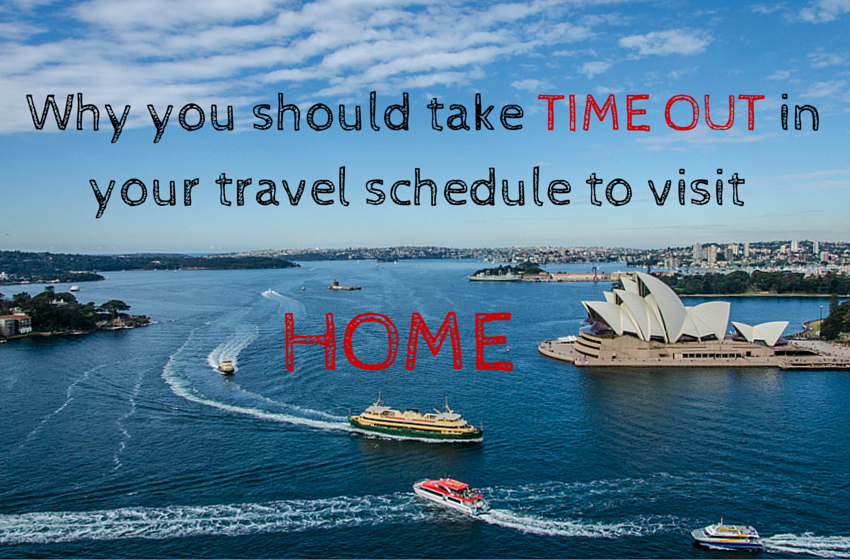 Ok so we all visit our home towns to catch up with family and friends, that’s a given.

No matter what the reason you may have left the city that you spent growing up in it is always good to go and explore it from time to time to give you perspective and help you appreciate what is good, bad or just different to where you currently call home.

I am terrible about visiting Australia, my home country, not because I don’t want to see my family friends but because there are so many unexplored territories out there that often take precedent over going home to a place I know so well. Add to that the fact that it is so far away from where I currently live and super expensive to fly to, especially during the Australian summer and I have to be honest, I don’t go home as much as I should. Gordon’s Bay from the ocean walk (Bondi beach to Coogee)

After living overseas for 7 years, with no immediate plans to move back to Australia, and recently taking David to Australia for his first visit to the land down under, I have certainly fallen in love with my home all over again as well as appreciated aspects of where David and I currently live in Germany. Firstly, I noticed that Sydney is very clean. It probably does help that it is a young city that has only been around for hundreds not thousands of years. There are strict smoking laws in Australia which means there are very few cigarette butts dismissively thrown on the ground. In general there is a lack of rubbish and graffiti in the city centre. This does not mean that all of Sydney is pristine by any means but in general people do seem to use the rubbish bins.

Don’t get me wrong, some cities’ character and vibe can be partly defined by the amount of graffiti around. For example, Hamburg in the north of Germany is a very arty, cultural city that I would even call grungy and a little bit underground. There is plenty of graffiti around the city but it adds to the arty feel of the place. In general, Australians are very friendly. They are renowned for their laid back, easy going attitude. For some reason I noticed it more than ever during this visit. Strangers will laugh and joke with you or make chit chat about anything and everything. This relaxed attitude means that the service you receive in shops and restaurants is a nice blend of attentive but not over the top. David already noticed that on his first visit to Oz.

This is refreshing because Germans are not very good at customer service. I know I may offend people by saying that and am making sweeping generalisations about both the Australian and German cultures but when it comes down to it, it’s true. Of course there are grumpy, unfriendly Australians and there are Germans who provide very good customer service. Basically it is not part of the German culture to make chit chat, this is not a criticism but a fact. I think this contributes to what people may perceive as a lack of customer service. During our short time in Australia I tried to incorporate a balance of showing off to David where I am from and catching up with family and friends. Being a tourist in my own city/country really made me appreciate how beautiful it is. Seeing and hearing David’s impressions made me see each place with more appreciative eyes.

I think most of the time we take for granted where we grew up and don’t take time to stop and appreciate our own backyard. I know I am biased but Sydney is damn beautiful! It is still my favourite city in the world after visiting over 40 countries. The light is different, the colours are more vibrant and of course all of this is helped by the year round fantastic weather. While in Australia I gained an appreciation for the restaurants and cafes in Europe that are open late into the night. Maybe this is partly due to some European cultures eating quite late but even in Germany, where 19:00 is quite a respectable dinner time, restaurants stay open far later than those in the middle of the Sydney. The long summer days in northern Europe definitely warrant the late opening hours. During our stay in Australia we stayed with my parents who live an hour out of the city centre. For some of the time we were lucky to have use of a car but other times we had to slum it and catch trains. Even though the rail system has improved since I was a frequent user as a teenager, it still can’t compete with most European cities. There was no just turning up to catch the next train, we had to carefully plan our trips in order to coordinate the connections so that we weren’t waiting 20 minutes for our connection. Of course the food is different. There are certain favorites that you get at home that just don’t taste as good anywhere else in the world. This also goes for the places you visit. Trying to explain to my parents our favourite foods in Germany just wasn’t the same as actually having them in front of us. Essentially what I’m trying to get across here is that every city we live has its pros and cons and when we travel it is often easy to identify them.

However, don’t forget next time you are home to take some time to appreciate where you come from and soak up all of the things that make it amazing for you.

What do you love about the country/city/village/town you are from? Just hit the ‘Leave a Comment’ link at the top of the page and let us know!