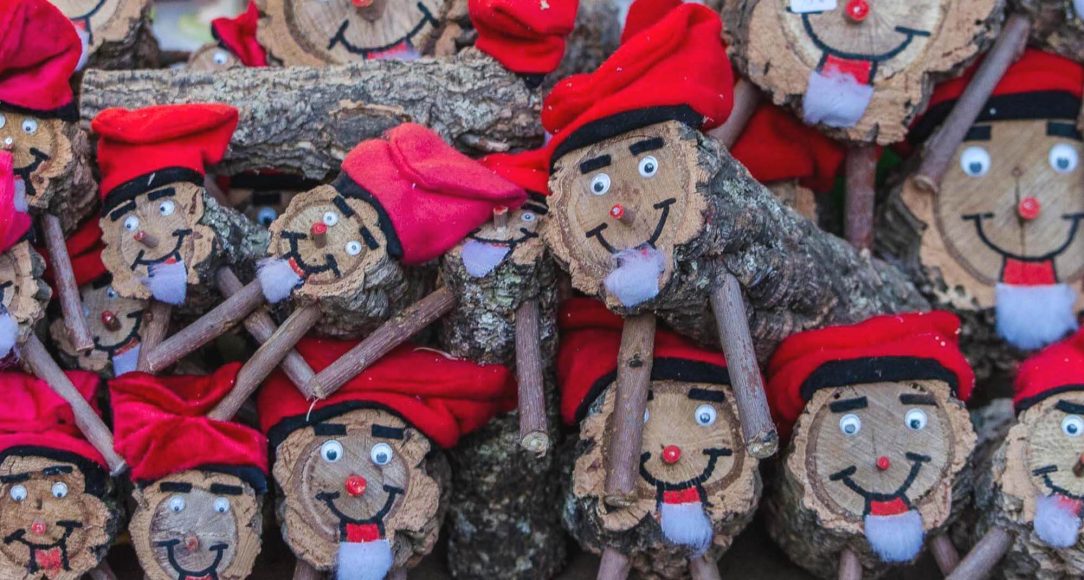 I originally wrote this post in 2016 but forgot to publish it so please read in retrospect. Despite the late publication, David and I wish you all a year filled with many wonderful travel experiences….

When you have a partner it is always tricky trying to balance where you will celebrate Christmas each year. Since I am from Australia and we live in Germany it is a lot quicker, easier and cheaper to go to Spain to spend Christmas with David’s parents. This is fine with me as I get on really well with his parents despite the language barrier, they speak no English and I speak very little Spanish. I love the Spanish Christmas (and sometimes only Catalan) traditions. Besides, Spain is one of my favourite countries in the world. 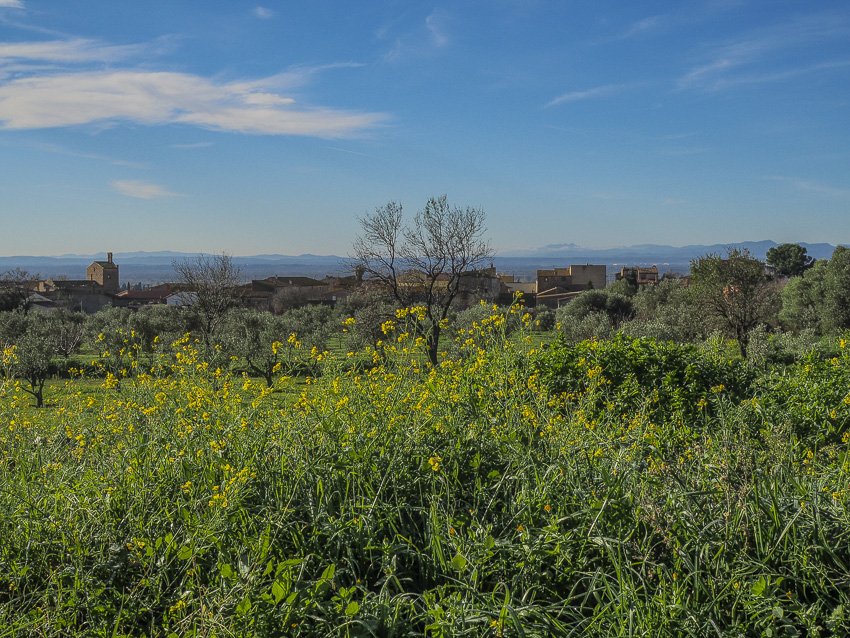 Costa Brava countryside with Medieval village in the background

As David’s dad (known as Papa F) drove us from the train station in Figueres to their home in Llansa I marvelled, as I always do, at the beautiful scenery. The majestic, snow-capped Pyrenees mountains loomed to my left and the Mediterranean glistened in the sunshine to my right. Since there had recently been quite a bit of rain there seemed to be even more different shades of green than normal.

You see, this is olive country, as well as wine growing country and plenty of fruit growing happens here as well. We passed the pale greens of olive trees, the bright green grass newly borne after the recent rains, the dark green of orange trees and every shade of green in between.

I never get sick of passing small Medieval village after small Medieval village. They are so cute with their obligatory church poking out amongst the houses. The stone walls that line the tiny windy streets have been standing for hundreds of years. Sometimes when we drive through these villages I feel like we have to hold our breath in, in order to help us squeeze through the laneway. Who knows what happens if a car comes from the opposite direction. 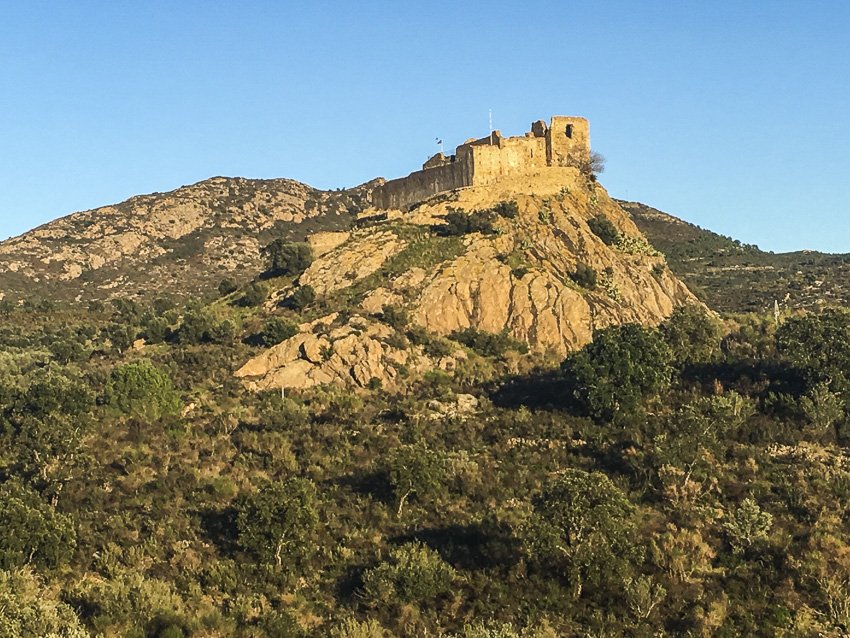 There is one old, dilapidated castle that dates back to the 11th century that sits high atop a hill. And despite the fact that it is in ruins there is still something imposing that forces you to pay respect to its grandiosity.

We arrived home to lunch already served on the table. A delicious tortilla de patatas prepared by David’s mum (known as Mama P), the most Spanish of Spanish dishes, and home-made ones are the best! I should add at this point that David’s mum is a phenomenal cook. 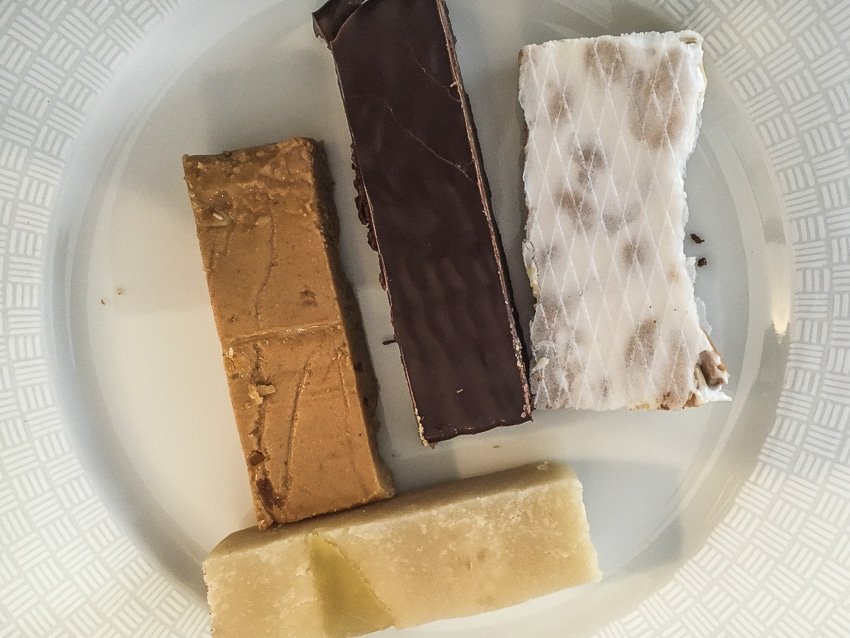 To add to our Spanish food fix we also had some Manchego cheese and Spanish ham. Oh, and I shouldn’t forget that we finished off the Turrón (a sort of hard nougat, traditionally made from almonds and made at Christmas, though these days you can buy it year round in some shops) for dessert. Aaahhhhh one of the many reasons I love Spain is the amazing food, delicioso!

Ok, let me get onto the Spanish Christmas side of things. Like most of mainland Europe, Spain celebrates Christmas on 24th December, normally in the evening. However, since the Spanish like their fiestas they also celebrate on 25th and 26th December. But wait, there’s more! Three Kings day happens on 6th January which is actually bigger in terms of present giving and receiving than Christmas. Let me tell you, it is good to be a kid in Spain at this time of the year.

So in the evening of 24th December we made our way over to David’s cousin’s house who has two young children. However, not before earlier in the day visiting the cemetery to send our felicitations to those who had passed away. 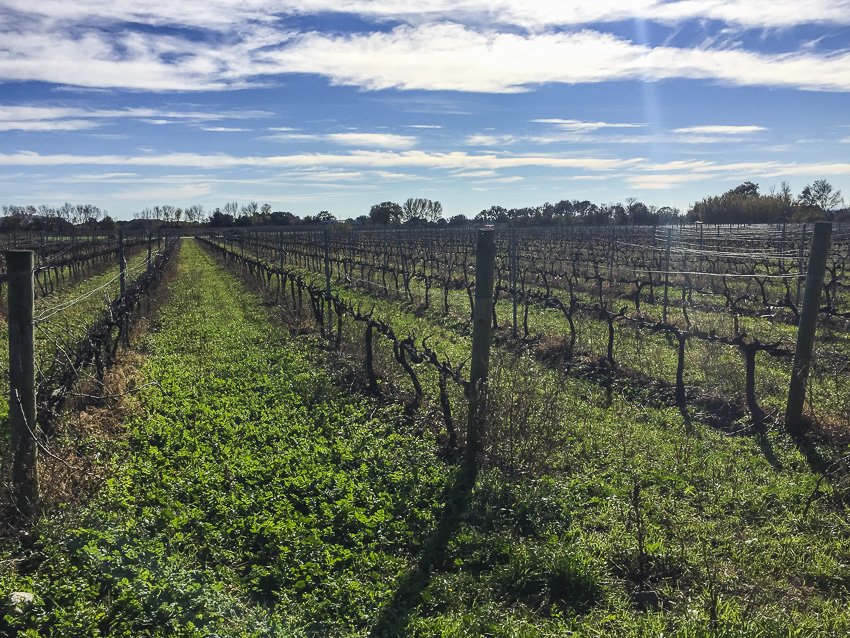 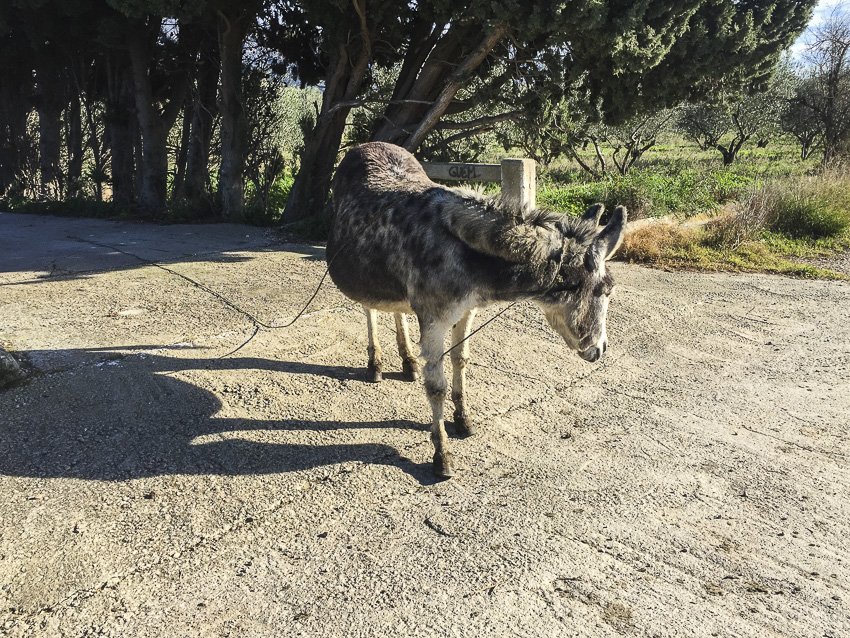 Even the cemetery was gorgeous. Set on the outskirts of one those Medieval towns I spoke of earlier, surrounded by vineyards. The peaceful setting made it a lovely place to pay our respects. On our way out we were greeted by a random donkey. Turns out it had escaped from a local farm. The joys of being in a tiny rural Spanish town is that there was bound to be someone who knew where the donkey belonged. 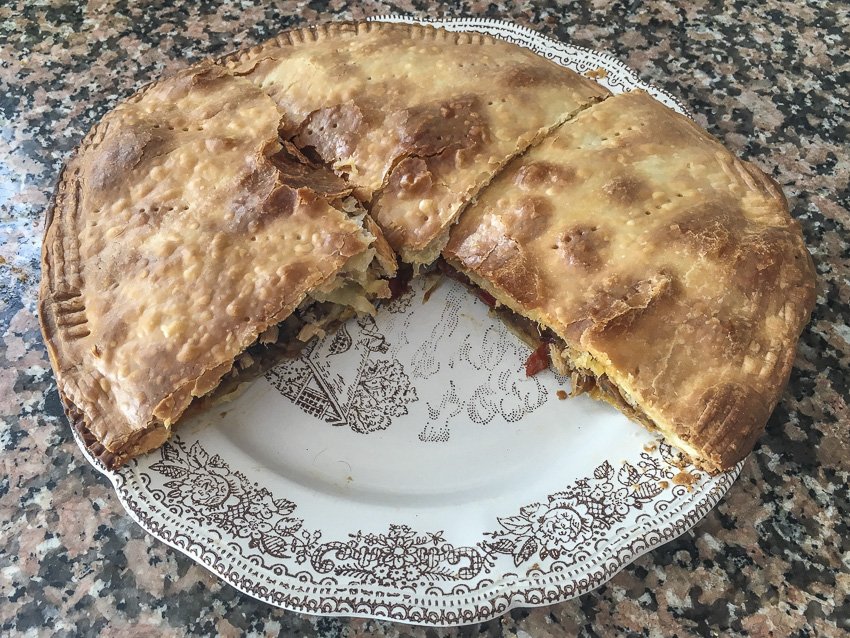 On our return home it was time for some more eating. This time empandas were on the menu, a traditional pastry filled with tuna, eggplants, tomatoes, peppers and onion. I already knew by this point that the diet was going out the window on this trip. Yum-O! 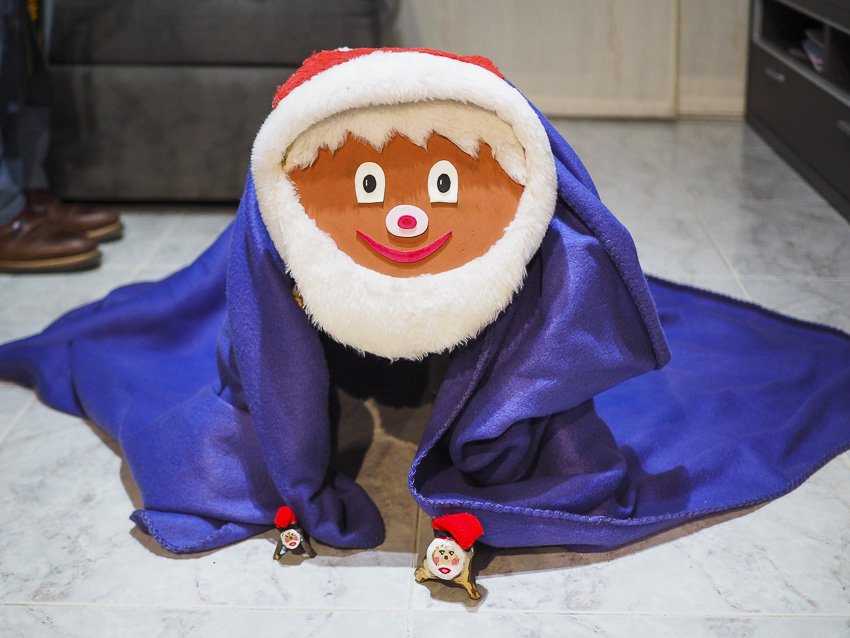 Ok, back to Christmas celebrations. Tió is a log with a face painted on it which wears a barretina (that coincidentally bares a likeness to a santa hat) which literally poops presents after the children have sung a song to it, asking it to do a crap while bashing the shit out of it with a stick. When you see it for the first time it is absolutely hilarious.

Read more about the tradition of tió here.

This year, once again I was not disappointed by the hilarity of the tió experience. Check out a previous post on Costa Brava that explains the Tió phenomenon in more detail. Of course after tió it was home for some more scrumptious seafood.

After some present opening on the morning of the 25th it was time to psychologically prepare for the feast that was about to happen for our Spanish Christmas lunch. A five course meal was planned but no-one, except David’s dad, who is obviously well trained in the art of eating, could manage the fourth course. I think we were all trying to save room for the dessert.

Wow, where to begin with this feast that could feed a whole village. To start with there were assorted entrees, including calamares a la Romana (a personal favourite), paté and selected savoury pastries. That alone probably would have been sufficient under any other circumstances. 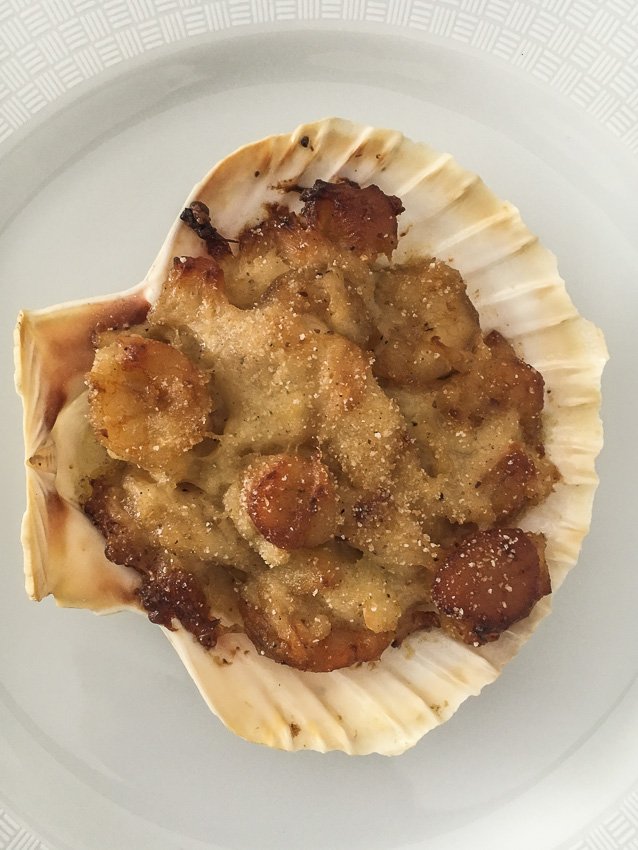 Then came vieiras, a seafood mixture in a kind of mornay sauce cooked in a giant clam shell. Again, we could have stopped there but Mama P had plenty more planned for the six of us.

A delicious prawn and fish stew followed that left our stomachs in pain from being so full with goodness. All but one of us declined the next course in order to rest before dessert came. Dessert is always good in Spain so it is definitely worth planning ahead and leaving some room.

A selection of Turrón and pieces of tortell (a giant brioche doughnut-like concoction with a marzipan filling, though this can also be cream). Needless to say after all of this eating and the drinking that went along with it, there was no need for dinner Christmas night. 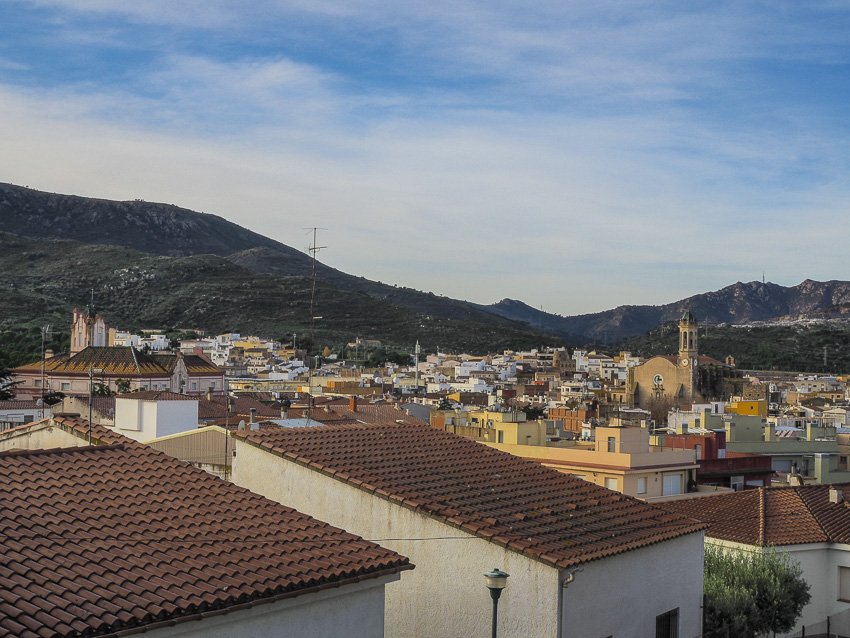 As I sit here on the balcony of David’s parent’s house defrosting from the German winter in the warmth of the sun I cannot feel more relaxed and content. You see today happens to be my birthday. The day after Christmas is a pretty chilled occasion in Spain. Similar to many other countries, people spend 26th December catching up with loved ones.

It is nice because the shops are not open, there is no manic sale shopping that causes otherwise completely rational people to become irrational and ravenous beasts desperate to buy the last of an item that was probably originally overpriced in the first place. It is strange, for someone who is a self-confessed shopaholic I am not a fan of sale shopping.

Instead I am choosing to spend time with the people I love. I am choosing to absorb as much vitamin D as possible before I head back to the gloomy, cold Munich weather. I can feel the icicles drop off me and slowly melt away. 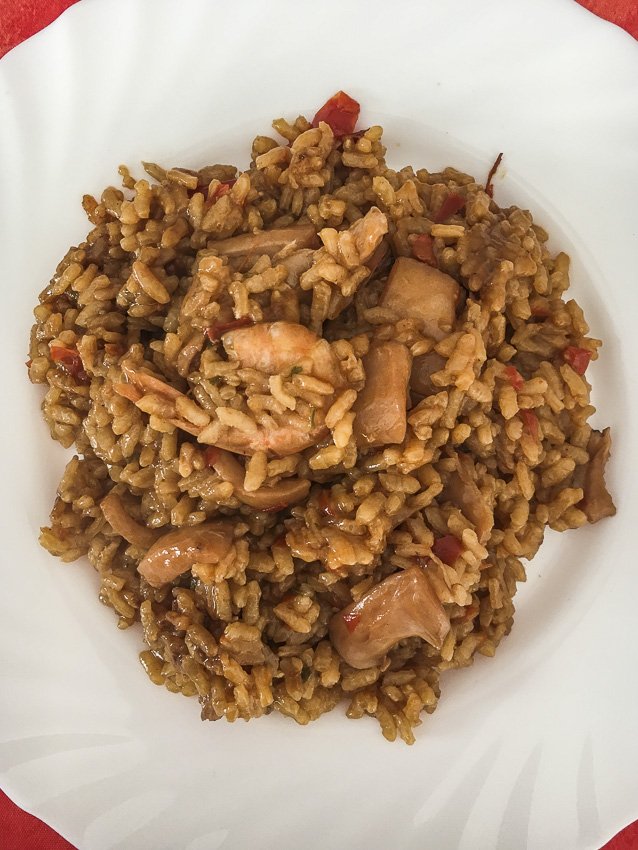 I am fortunate to have had home-made seafood paella for lunch with of course some celebratory French champagne, an assortment of mouth-watering (mainly French) cheese and a surprise chocolate birthday cake thanks to my wonderful fiancé. Life is good when it revolves around food though not always good for the waist line ;).

To end the Spanish Christmas and birthday celebrations I was taken to see a live nativity scene in David’s village. This is a performance that the whole community gets involved in. Do not be mistaken, this is not a few lame people dressed up in a stable, this is a recreation of the town of Bethlehem.

There is music, a light show and some live animals! Some of the participants clearly took their roles very seriously, trying their hardest not to move. Others, like the kids, were having a lovely social time and tried their best not to smirk as passers-by gawked at them.

My favourite part of the “show” was the live caganer. For those of you who have never seen or looked closely at a Catalonian nativity scene you have been deprived of el caganer (literally, the crapper or shitter).

Do you sense a theme of pooping here?

Yes, you read correctly! For some crazy reason someone thought it was important to highlight the fact that they didn’t have toilets back in Mary and Joseph’s day and that they were required to do their business in the corner of the barn. No-one can explain el caganer’s existence to me.

I find this character absolutely hilarious. Maybe I’m just a little bit immature. It is not until you point it out to a Catalan person that they vaguely realise your amusement. Anyway, back to the live nativity.

Right at the end of our tour around the various scenes, in the corner, sat an unobtrusive man dressed in the traditional Catalan outfit with a plastic butt and a plastic poo on the ground. You see, it gets a bit chilly at night so instead of the dude having to freeze all sorts of body parts he gets to wear a fake butt or maybe it is in an attempt to help him save some dignity, if that is possible.

My very Spanish Christmas was filled with amazing food, wonderful people and a culture that it is very different in many ways to the Australian one I was brought up in. However, the general essence of the celebrations were the same, spend time with the people you love and be thankful for the life you have been blessed with.

We hope you all had a lovely festive season and would love to hear about it.

We would love to hear about the Christmas traditions you have experienced on your travels or in your own country in the comments section below. 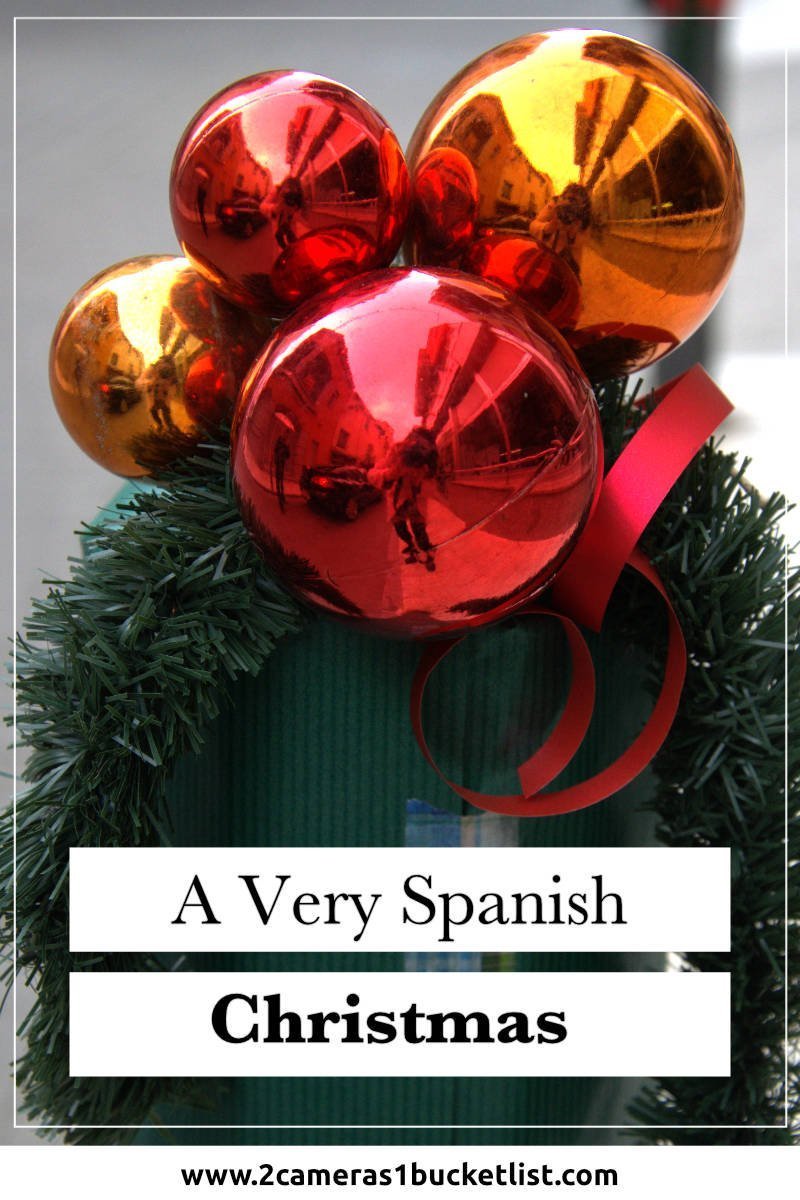