The ups and downs of learning a new language 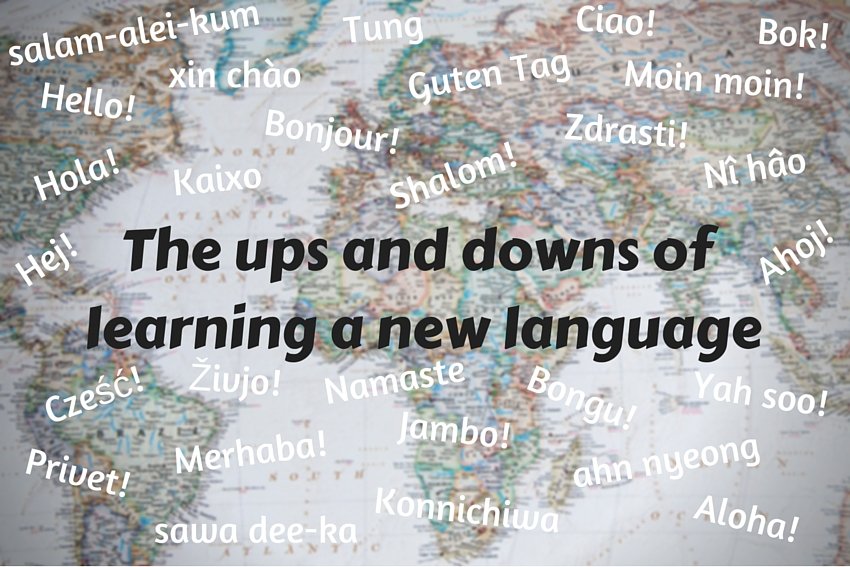 So I have a confession to make that I am not very proud of.

I have been living in Germany for 7 years and am not fluent in German. The main problem is that my work is completely in English and I know enough people who are fluent who can help me out in desperate times. This is by no means an excuse but it certainly doesn’t force me to practice on a daily basis. Don’t get me wrong, it is not from a lack of trying. Over the years I have taken many courses of various types, my bookshelf is filled with how to learn German books. This has allowed me to obtain what I call survival German. I can get by on a basic day to day level. I am able to have short conversations with people, order efficiently in restaurants and even book my travels in German. However, as soon as someone says something that I am not expecting I get very flustered and suddenly all of my German knowledge has escaped from my brain and these days is replaced by Spanish. Before I moved to Germany people had reassured me that everything would be fine because “most people speak English in Germany”. After walking into shops a number of times and asking if they spoke English and receiving a firm “Nein!” as an answer this false sense of English speaking security went out the window. At first I did not understand why they would deny any ability to speak English when they learn it at school. However, I now have much more empathy as I certainly feel a bit rusty after coming back from a 4 week holiday let alone not having spoken it for a number of years. I very quickly realised that learning a language and feeling confident about it is so much about getting out there and speaking it, having a go, and not being afraid to make mistakes (a hard one for this perfectionist). Don’t get me wrong, learning a language has many satisfying facets to it. The feeling of euphoria after successfully making an appointment for something or speaking in German for the majority of a doctors appointment. It is certainly nice to be able to go to a restaurant now and not have to get Google Translate out every 5 seconds. Some days are definitely more successful than others. For no apparent reason everything will go well and a goal is achieved in German and then there are other days when even the most basic word or sentence is not making sense to me. Some people are very patient and sweet and tell me that my German is good (NOT!) only because they don’t want to speak English ;). Others are not interested and are quite impatient and abrupt (this might be a German thing). There have of course been many failures, like the numerous occasions where I received an official looking letter in the mail (have you seen the length of some of those German words?) and having not understood it, put it in the pile to be filed and conveniently ignoring it until a few weeks later receiving another very similar letter. Oops I was meant to actually respond! Luckily I’ve never had my phone or electricity cut off due to this ignorance. Then there was the time I rang to make a hairdresser appointment, turned up on the day I thought it was only to find the hairdresser closed! Lesson learnt, always repeat the date and time when making appointments, especially on the phone. Having to speak German on the phone makes me break out in a sweat and my heart beat faster. It’s amazing how having non-verbal cues can make things easier. Of course there have been many times where I have been asked a question in German and I’ve taken a gamble at a yes or no answer only to receive some very strange looks and reactions (oops wrong answer!). When I left Hamburg, where they speak what is called Hoch Deutsch (high German – a very pure form of German) I was feeling happy with my progress and then I moved to Bavaria! Many people in Bavaria, especially older generations and people in rural areas, speak Bayerisch (Bavarian). To someone who is not fluent in German, and even for some who are, Bavarian is like a completely different language. Even when a true Bavarian speaks Hoch Deutsch their accent is so thick that it is very hard to decipher what they are saying. I guess it is a bit like a non-native English speaker trying to understand a really strong Scottish or Irish accent. I am ashamed to say that when I moved to Munich 3 years ago I decided to have a little break from German lessons. Those of you who have learnt a language while working full-time will appreciate how much hard work it is and my hat goes off to those who have done it successfully. I had intentions of starting lessons again but then I met this Spaniard whose parents don’t speak English or German so I decided to start learning Spanish, and so the learning curve begins again. Needless to say, that “little break” has probably become an infinite holiday. However, I will continue to persevere with my German in the hope of being understood to some extent. Luckily David has continued with his German and is quite proficient since he uses it at work quite regularly. Actually this is probably not very beneficial for me as it is too easy to lean on him when things get tough in the German speaking world. In Munich people are less reluctant to speak English and are actually often quite happy for the opportunity to practice. Good for me but not so good for my German and my attempts to immerse myself in the culture. Still, I will continue to persevere and thank those grumpy people who don’t speak English for making me get outside of my comfort zone and challenge myself on a regular basis.

Trying to learn a new language, even just enough to get by from day to day or a few words to help connect with locals while travelling, can be stressful but to be honest the frustrations are worth it when you are successful. Those moments when you order in a restaurant and when the meal that comes out is actually what you were hoping for and not a mystery dish or when you get that extra bit more attention when you manage one or two words in a shop, make you want to jump and cheer with euphoria. David is multilingual, which I am incredibly jealous about. I have noticed that this certainly makes travelling easier. Of course for the obvious reasons of being able to read menus and generally get around. However it’s more than that. When the cheese stall owner in a small French market realises you speak the language you suddenly learn a whole lot more about where that cheese came form and how it is made. When the bored ladies in the shirt shop in Italy can converse with you you get great customer service. When the taxi driver in Peru speaks Spanish with you you learn so much about his culture. Yes David can speak all of those languages and more, now you know why I am envious of him. I guess what I’m trying to get across here is that learning a language can go a long way to giving you an even deeper insight into a culture and country regardless of whether you are living there or visiting for a few days. When I was in Russia it was amazing how learning to say hello, please and thank you got us a smile from a seemingly serious Russian or when we were in Indonesia and the pleasure the people at the hotel got from teaching us words and then having us successfully say them correctly (well kind of) the next day was priceless. Learning a new language or a few words can definitely broaden your travel experiences. Tell us about the trials and tribulations you have had learning a new language. Have you had some funny or not so funny experiences attempting to speak the local language while travelling? Do you have any tips for making the language learning process easier? Just hit the ‘Leave a Comment’ link at the top of the page and let us know!

Travelling is my hobby